Skip to content
To read:
In unity we trust!
The struggle continues
To be Trans alive and inspiring 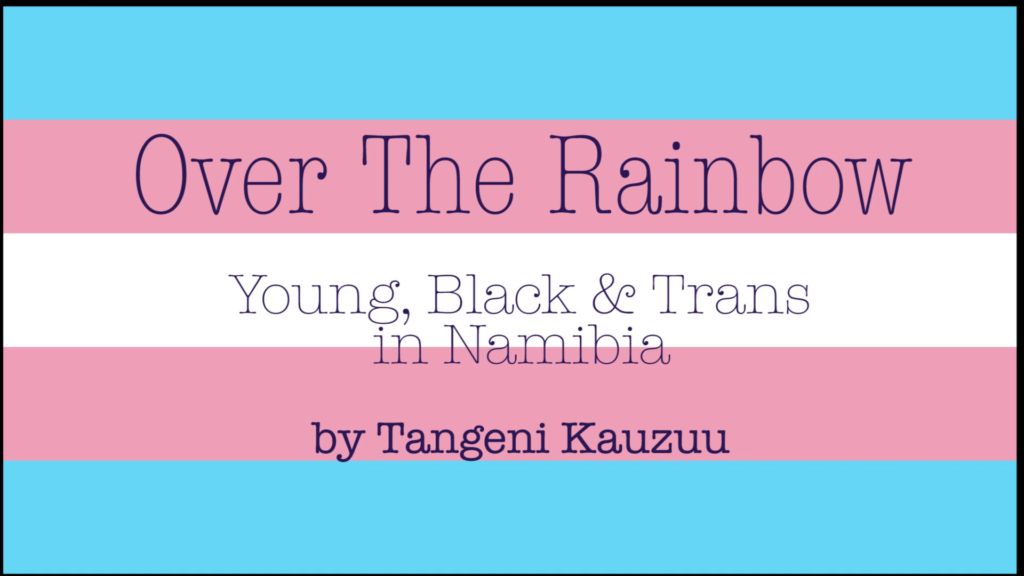 Namibian gender non-binary poet and activist Tangeni Vannezza Kauzuu has scored a first with her documentary SO Over the rainbow, young, black and Trans in Namibia. The film which premiered in commemoration of the Transgender Day of Remembrance at the Goethe Institute is the first in a series of in-depth interviews with 5 transgender individuals who share their experiences, opinions and fears and the politics of being Transgender in the Southern African country. Queerstion Media Editor Miles had the opportunity to interview the first time filmmaker.

QM:  Congratulations may you tell us about  the documentary

TK: Thank you. SO Over the Rainbow takes on the emotional and challenging aspects of what it means to be Transgender in Namibia, It investigates the opinions and experiences of 5 trans men and women dedicated to helping foster an informed and rational dialogue. I directed and produced it myself, so far it has publicly screened twice.

QM: What motivated you to work on this piece, is there any other works like this in Namibia for trans *

TK: The fact that I couldn’t find anything of its kind anywhere about us was one of my biggest motivators so I’m pretty sure it’s the first of its kind in Namibia but I certainly don’t want to be the last or the only one. As a poet, I’ve always had a passion for telling stories and growing up I realised just how misconstrued our identities and culture are once our stories are told by outsiders and how much of the truth is conveniently left out to suit the agenda of the storyteller.

QM:  How was the process of documenting planning  and how long did it take

TK:  Stressful to say the least but an eye-opener nonetheless. I filmed over a period of 3 months in the capital city as well as the southern Namib.

QM: What challenges did you encounter and how did you overcome

TK:  Not as many people were willing to tell their stories on camera and a few backed out last minute. The current state of the LGBTI community in Namibia has been in the middle of a huge reshuffle which has brought a divide amongst us so certain individuals simply had no interest to participate because of my affiliation with others. There is not a shortage of openly trans people especially in the capital so it wasn’t hard replacing them. I do however hope they see the difference this one made and either make their own or assist in the next one.

QM:What main issues are highlighted in the documentary

TK: How much trans* people know about their rights, what their experiences are with healthcare providers, what does being trans mean to them as well as how the trans community can help the locals better understand them.

QM: What do you hope to achieve and why is it important for trans* voices to  reclaim public platforms

TK:  I hope that I have inspired even one LGBTI person to tell their own story because most foreigners come to our countries and they steal our stories or present us in a way that suits their agenda, consequently this gives a distorted view of our struggles . In making this film on a shoestring budget I wanted to show that money is not a issue, that there are people out there that are willing to invest in the free LGBTI African dream and to show just how easy it can be if we stop just depending on NGO’S to do it all.

QM: You have had public screenings, how  has been the response thus far

TK: There has been a really curious response from both allies and LGBTI themselves about wanting to see more in-depth interviews as it was a 20-minute documentary there was so much I felt needed to be included but because of time limits I couldn’t.  It has also been recently screened at our  pride march in Swakopmund. We also shared trailers online and of course there have been some religious and transphobic verbal attacks, overall the positives overshadow the negatives.

QM: What future plans for this documentary and any plans for more other artistic works

TK: yes I definitely am working on more in-depth personal angled documentaries and would love if anyone who has a idea of what they would want to know more about to contact me and help me motivate others to do the same and follow in my steps by telling their stories.

QM: Who do you owe your success to

TK: Appreciation goes to: The Other Foundation for believing in my grassroot dream, to Out right Namibia for the posters at the screening as well as the Goethe Institut for hosting the screening and to My best friend, my twin and my mentor.

Do you identify: I identify as a “queerbian” a term I came up with to describe my sexual practice, preference and identity all in one as a non-gender conformer who is attracted to trans people and lesbian women.

What makes you relax:  I enjoy running, reading or writing and i also  meditate

What inspires you:  Passing on knowledge and seeing LGBTIQ individuals help and uplift one another instead of competing

Your message to the world and other LGBTI people: If you believe in yourself hard enough and you keep trying no matter who says what, how many times u hear no and how many times you fall, all it takes is one person and that person is you! We have to tell our own stories, nobody else knows the raw truth about our existence like we do. 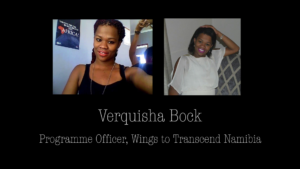 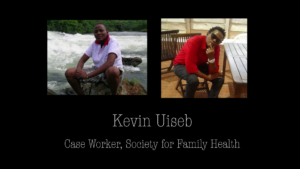 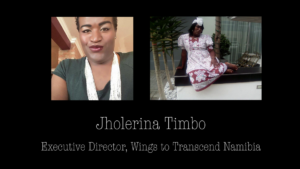 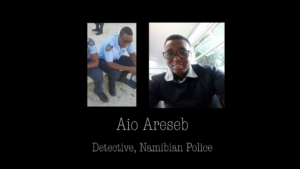 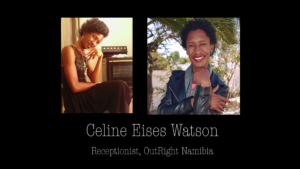