Today 20th November is Trans Day of Remembrance TDOR,  it is an important reminder of the violence our community faces each day owing to anti-transgender hatred or prejudice.

On this day, with love, we honour and remember all the departed Transdiverse persons, those who lost their lives to transphobic violence, those who took their lives to escape daily degrading treatment, torture and torment at the hands of those who are supposed to protect us. With anger and pain, we remember the Transdiverse persons being subjected to inhumane treatment in streets,  hospitals, clubs, homes, workplaces and schools. With hope we celebrate the resilient lives who continue speaking truth to power, questioning anti-trans bigotry and hate. 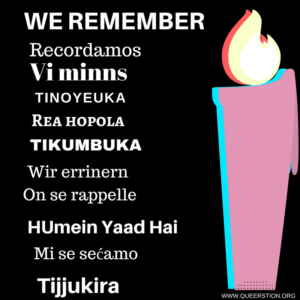 Despite increased visibility, trans people, especially trans women of colour continue to be murdered in unprecedented numbers 2017 has proven to be another of the deadliest years on record for trans people.  According to TransGender Europe Trans Murder Monitoring project, 226 people lost their lives to transphobic violence this year

It is both infuriating and saddening to note that many violations and murders  are often misreported owing to misgendering and ignorance or worse still not reported at all.  In most instances, transdiverse individuals do not report threats of violence for example to the police because they fear further retribution and discrimination.

This day serves to raise awareness as well as reveal the impact of transphobic  violence on trans people, our families,  allies and friends. On this day and every other day, Queerstion Media calls on activists, allies and societies to stand with us in speaking out against violence.

There can never be enough visibility or support, we urge people to speak out against trans violence, call out those instigating hate,  volunteer or assist organisations, individuals or collectives working for trans rights.