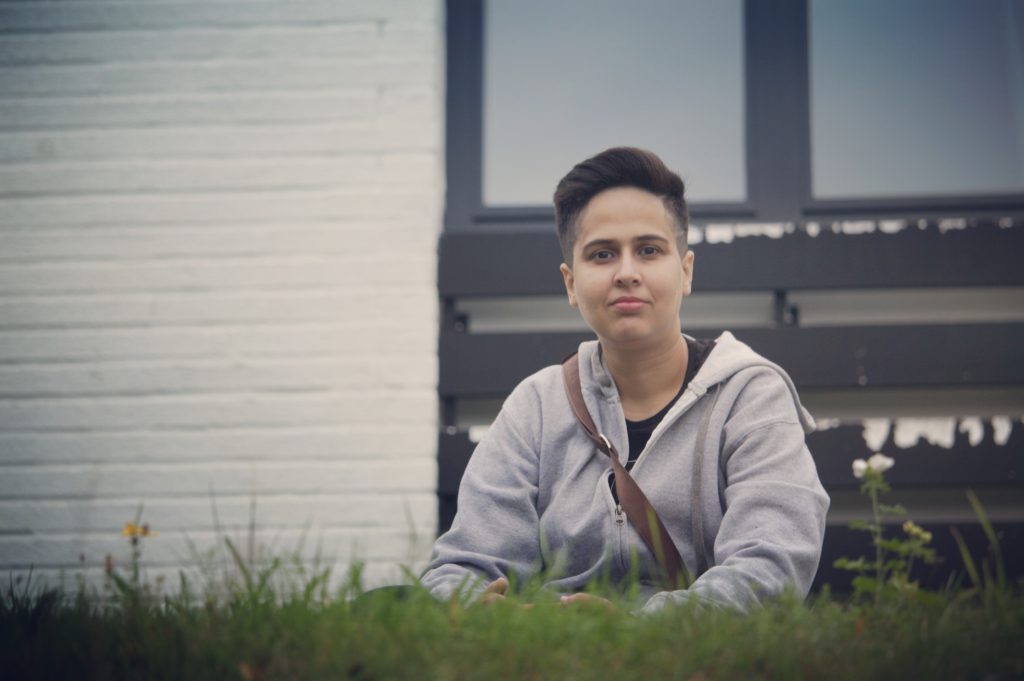 By Sumair a transgender man  from Pakistan Sumair is  currently in the asylum process in Sweden.

Failing to cope with the dysphoria I face, my only refuge is pretending to be a eunuch instead of a woman that I appear to the world. Another painful attempt to stifle my voice from declaring my true identity to the world- to die once more, to lose myself once again.

For me being a transgender is not a choice, transitioning is!

Nothing in the world can compel people to resort to the act of transition, but becoming a transgender is not the same thing either. Whether you chose to transit or you opt to defer it (for reasons of your own) a transgender person is still a “trans”. Even when one never chooses to medically transit, they never cease to be transgender either. They are born with a ‘distinct identity’ — a different sex, contrary to the gender their apparent appearance identifies them with.

I was born a transsexual, for it was how I was supposed to be. I never considered ‘ transsexual-ism’ a “curse” much against the popular belief neither degraded it to be loathed or be afraid of. For We are REAL people, who contribute an equal voice to the symphony of human life, adding another vibrant stroke to the colourful rainbow of humanity and breathing among myriad others with the same colour, caste race or creed ; not originating from mars or neptune nor are we some species form the world hitherto unknown!

We’re a legitimate ‘part’ of the ‘grand mix’, for we contribute to the diversity that makes life beautiful and worth living for everyone.

Growing up and living in a conservative and rigid Islamic society of Pakistan and Muslim family I  had my fair share of fears and insecurities. I never dared to explore myself, owing to those fears. I also believed that  being an LGBTIQ person was  against nature, due to anti LGBT indoctrination which provides no room or space whatsoever to even discuss our issues. I didn’t have the courage to find the answers to questions that were being raised constantly in my mind. It pained me inside whenever I tried to make sense of myself and my gender identity, I died every day during that period as i faced  criticism and objections relating  to my gender identity. But I was not the only victim in this story, my family also had to respond to questions full of hatred and spite. My life became more difficult, and I made numerous suicide attempts, which were luckily unsuccessful. However, the mere act of trying to take my life made me realise the importance of life. After passing through that miserable phase of dying in and out every single day, I gathered  strength and courage and  vowed to myself i  would never allow any person, any notion of the world to despise or drive me to the point of no return. Finally i overcame what seemed like  an never-ending nightmare.

It started as a journey full of unanswered questions?

Who am I? Was I supposed to be a boy? What went wrong? How did I get this far without realising something was not right? How can I fix it? Will people think I’m a freak? What am I supposed to do now? These questions led me  to the path of  self-discovery and hope. I did what any other curious young mind would do. I searched, I questioned, I asked and I explored. I was fortunate that i  had access to internet and i could communicate in English. At 14 I started searching for information online and discovered about  gender dysphoria, this information turned my world upside down. My life between the ages of 14 and 18 were the most difficult ones. I began to hate myself, which seemed devoid of any aim, any goal or an inspiring purpose. My life came to a halt without any ray of hope and I sucked at the end of a tunnel where it lead to but a dead end. I suffered from high levels of depression and anxiety. I contemplated suicide as my ultimate end. Many friends left me during those days, and the one who hung around also seemed rather uncomfortable. My student life can be easily termed a phase where I became an easy target or victim of gender role. Studying about sexual minorities rights increased my frustration. I went to see a psychiatrist. He suggested that I should undergo electric shock therapy to cure myself.

My life became more difficult, and I made numerous suicide attempts, which were luckily unsuccessful. However, the mere act of trying to take my life made me realise the importance of life. After passing through that miserable phase of dying in and –out every single day, I gathered the strength and courage. I vowed I would never face that scenario again and I would never allow any person, any notion of the world to despise myself and drive to the point of no-return. I overcame what seemed earlier a never-ending nightmare which killed me every day.

For some reason it seemed i needed to go through this journey for me to  actually find my precious elements; courage, hope, faith and confidence. When i finally  came to  accept myself, i  realised  that I was  not alone, that there are millions of us, I found out that being transgender isn’t weird or abnormal, it is  who we are and who I am too.

Today as i  go through my medical transition, I remain resolute. I have taken up this decision to live  my life the  way I want. I have learnt to embrace myself, the most important decision of my life. I  never want anyone else to be subjected to pain and anguish for being true to themselves.

My struggle has not ended, it has just commenced. I know that this isn’t going to be an easy journey, but it’s also not an impossible one. Nothing in the world can bring me down. I won’t give up! I won’t fail!