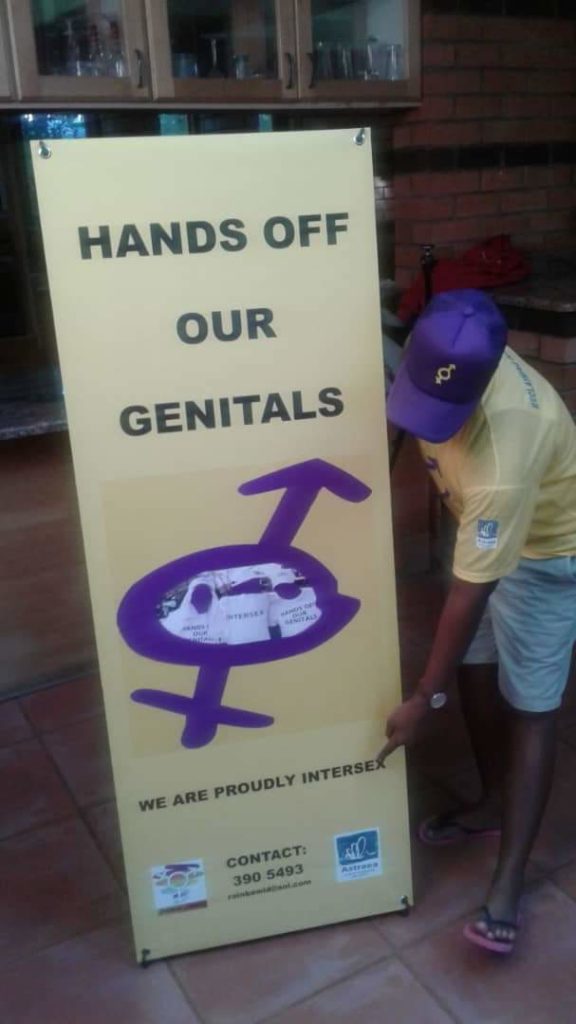 Members of Rainbow Identity Association (RIA) in Botswana are embarking
on one-on-one meetings with members of Parliament and councillors, with
the aim of unpacking their “Hands off our genitals” campaign.

The campaign aims to stop the country’s Ministry of Health and Wellness from performing genital mutilation on babies. In an interview,
RIA’s director, Skipper Mogapi said that they do not want the government
to operate on intersex babies. Mogapi proposed that the health department allows the babies to grow so they can make the personal choice when they reach puberty.
“It should not be the choice of the hospital. And parental consent is not always right because it may not be in the best interests of the child,” explained Mogapi.

Towards the end of 2019, RIA held consultative meetings with councillors
in Gaborone where they informed them of the mandate of the organisation
and its campaign. The organisation also travelled around the country
raising awareness of its campaign.

RIA spokesperson, Urbenia said they are going to continue with their mandate this year.
“We are yet to pick up from where we left off. Our aim remains to raise awareness of issues affecting intersex people,” she said.

Urbenia revealed that they have been struggling to find a slot in parliament so they can go and present their case. Because of this, RIA has decided to speak to individual MPs and councillors.
“We are planning to have a dialogue with councillors at the beginning of March,” she said.

“Rainbow Identity Association is the very first and remains the only organisation in Botswana to focus on the needs and rights of the transgender and intersex communities in Botswana.”

RIA has over 200 members. Some of the members say they are the opposite sex of what they were assigned at birth. Others feel they are both male and female. Still, others do not identify as either gender. Each one of them is unique, and their journey is personal.